The ins-and-outs of advocacy with Jen Fraser

ONE Campus’ fearless leader, Jen Fraser holds an abundance of experience when it comes to advocacy. From activism at her alma mater, Holy Cross, to her time as a Campus Manager and now as the Director for College Organizing at ONE, Jen knows her stuff. This is why she’s excited to share more of her insight on college advocacy, grassroots organizing and campaign trends.

These answers were a part of a larger conversation she had on the Achieve Podcast in the fall. 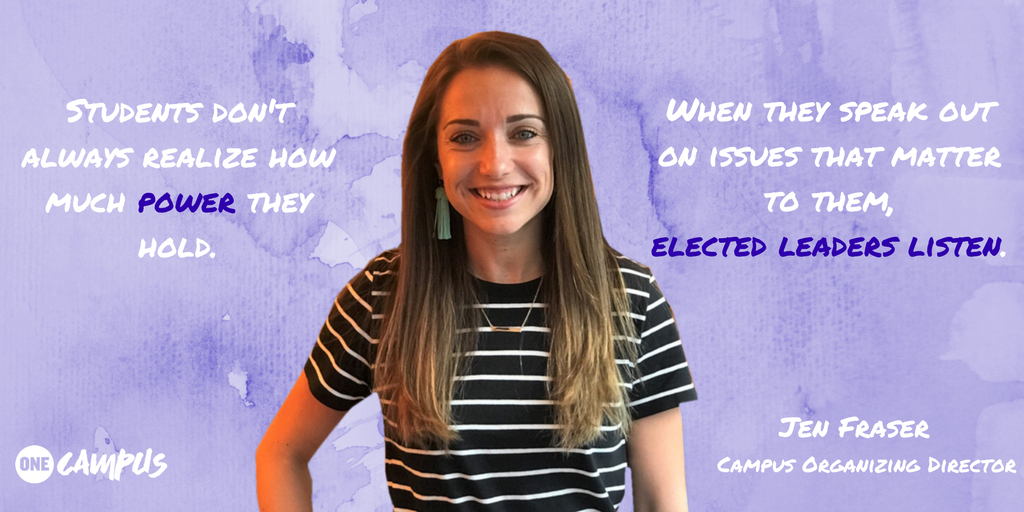 When and how did you get your start with campaign work and grassroots organizing?

In high school and even going into college, I knew I wanted to be involved with “making the world a better place”—but I thought charity and direct service (which are valuable and important things) were the only ways to do that. It was the only way I had been taught that you could make a difference in the world.

I went to the College of the Holy Cross in Massachusetts, a Jesuit college where social justice is a big part of the mission and culture. It was there that I got more involved with political campaigning, activism, and social justice. I became passionate about feminism and women’s issues, started attending protests and advocating to my elected leaders, and canvassed and phone banked for political campaigns. I got really involved with Oxfam America and started an Oxfam chapter on my campus and interned in their organizing department. All of these experiences started opening my eyes that through advocacy and activism I could affect issues I cared about at the macro level. And I learned that what I was doing was organizing—basically building power by developing relationships and bringing people together for a common cause—and realized that through organizing you can have a bigger impact than if you were just acting alone.

I got hooked on all of that and felt confident that [advocacy] was what I wanted to do with my life in one form or another. After college, I moved down to Washington, DC where I worked at a couple of different non-profits including Bread for the World doing grassroots organizing. I made my way to ONE about five years ago to be a campus organizer, and today I’m the director of ONE’s college organizing program. I love my job!

What’s been your favorite part of the job?

I think the best part of the job for me is seeing ONE volunteers develop into activists and leaders who are having incredible impact on legislation, directly because of their participation in our program. Working with ONE’s campus program, I’ve gotten to see countless students sign up to get involved with ONE on a whim, and four years later they are graduating college as sophisticated organizers who have built volunteer teams, educated hundreds of students on their campus about issues of extreme global poverty, and generated hundreds of advocacy actions like handwritten letters and phone calls to their members of Congress. They’ve developed presentation skills, relationship-building skills, and leadership skills. And most importantly, they’ve truly made an impact on extreme poverty, and often times have helped to persuade an elected leader to support our issues. I feel lucky to have had that experience in college myself, so I love that I get to be a part of a program that provides students with that same life-changing experience. 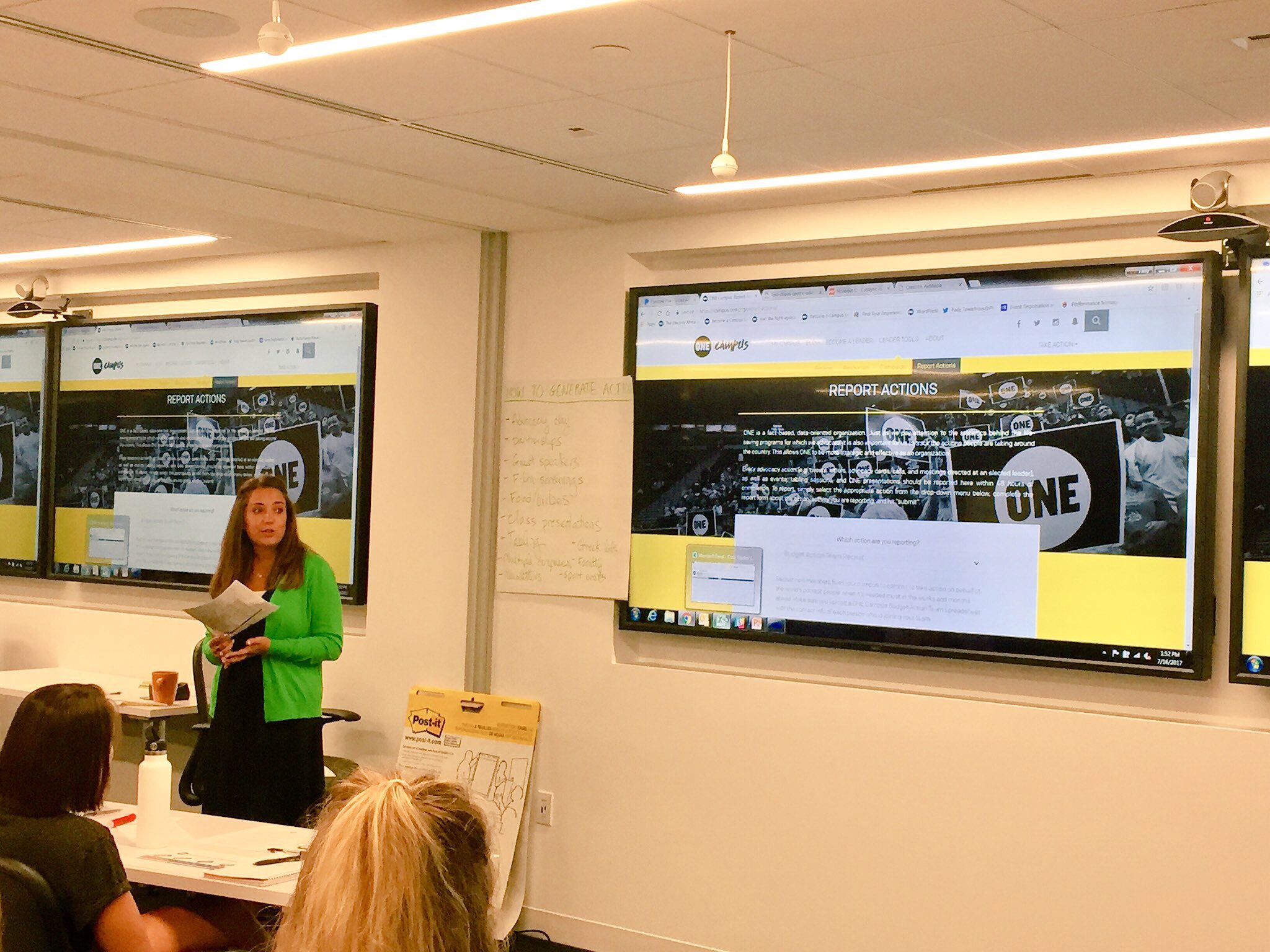 What makes a campaign successful?

When it comes to changing attitudes and behaviors of politicians, we often see “unlikely” members of Congress from both sides of the aisle step up as cosponsors or supporters of legislation simply because enough of his or her constituents spoke out through letters, calls, tweets, etc. That’s where movements are so incredibly powerful. We’ve seen U.S. Representatives cosponsor bills literally because a small group of student and community members sent letters and called their offices over the course of several months. It’s all about having a steady drumbeat of continued, sustained pressure until that elected official can’t ignore it.

There are three things that come to mind for me when I think about characteristics of successful campaigns.

1) Always have a call to action. At ONE, we’ll almost never have an awareness campaign for the sake of awareness. While education about the issues we work on is a huge part of our work, our campaigns will always include a call to action. I think that’s an important part of developing an issue-based campaign—you have to have a strategic, timely, specific call to action for people so that they know how to channel their newfound energy for the subject that they just learned about. Otherwise, campaigns can become a lot of talking and little impact. It’s more imperative than ever that you give people clear, tangible and easy ways to step up and do something.

2) Tell a story. While the facts and figures and statistics are important, it’s the story of a girl named Eva in Tanzania who has to walk hours each day to collect drinking water instead of going to school that really captures peoples’ hearts and minds. This is especially necessary when you’re working on issues that people don’t have self-interest in; few people in the U.S. are directly impacted by extreme poverty in Africa, so it can be hard to get people engaged unless you can effectively tell the stories of people they may never meet to make the issue real for them.

3) Inject creativity into your campaign. My colleagues at ONE are brilliant about being edgy, creative and provocative with our campaigns, and I think that makes a big difference in terms of getting peoples’ attention. During the 2016 presidential election, we ran our ONE Vote campaign trying to engage candidates for federal offices to tell us what they would do to fight extreme poverty if elected. So we literally traveled around the country in a bus with a giant blow-up bouncy house in the shape of the White House. And in order for people to “enter” the White House, they had to fill out a postcard to the presidential candidates urging them to have a plan to end extreme poverty. It was way more fun, eye-catching, and engaging than just standing behind a table and trying to get people to approach us. 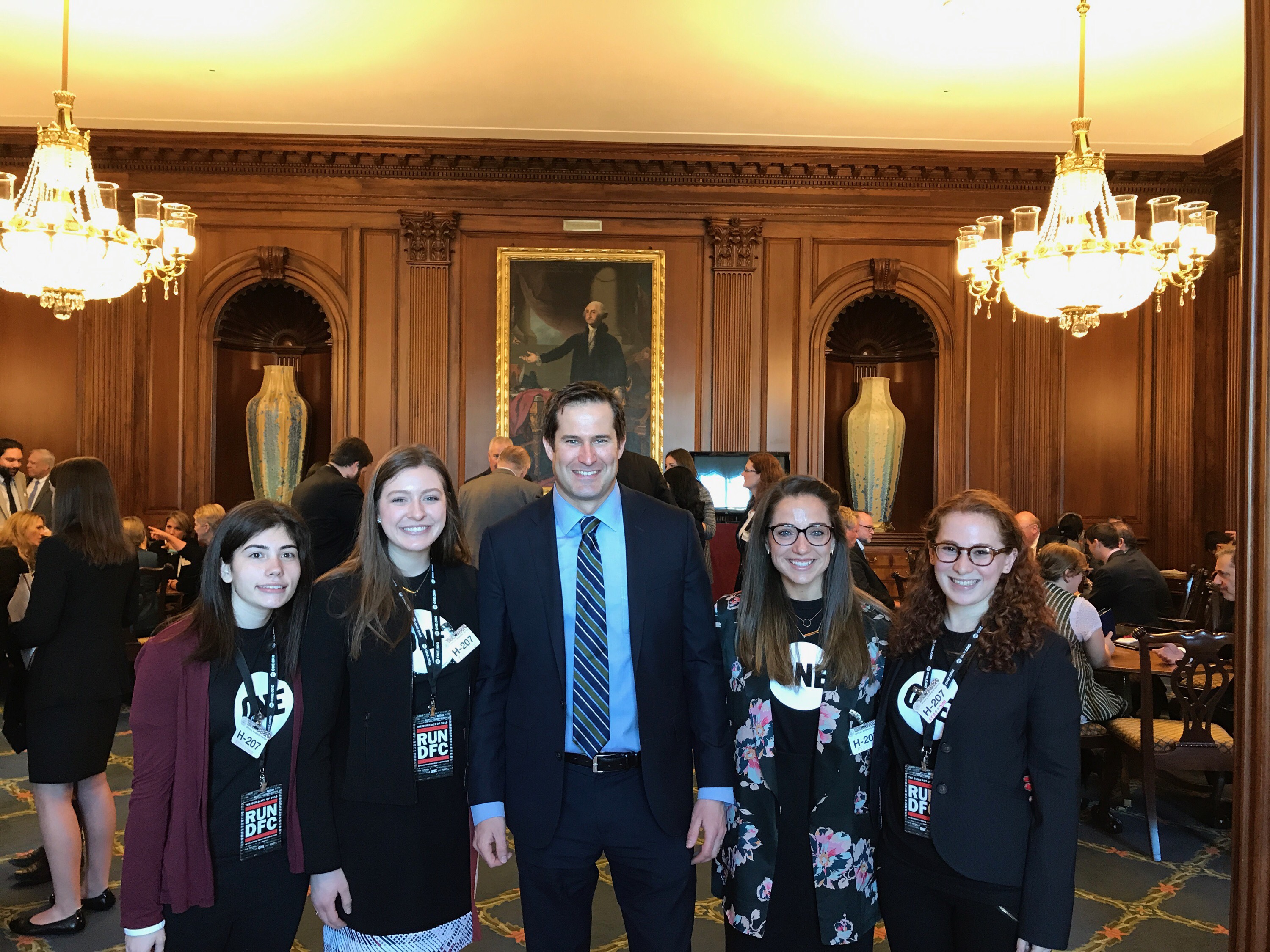 What is the future of awareness and organizing campaigns and how should we define success in the years to come?

When I think of the future of issue-based campaigns, a few things come to mind:

1) More global. We’re so interconnected through digital platforms that even domestically-focused campaigns are often overlapping or having ripple effects with campaigns happening in other parts of the world.

2) More action-oriented. As I mentioned, people are getting more involved with advocacy and are looking for ways to take action. We’re seeing more and more young people get civically engaged, and that’s a really exciting thing. I think the question is will it be sustained—will that energy die out, or will people make it a lifelong habit to use their voices and speak out on issues they care about. We already know that organizing and using our voices to hold political leaders accountable is effective, so I think success will be if we can get more young people to make a habit of doing it.

3) We need to work harder and innovate in order to affect change. Along the lines of being more action-oriented, “armchair activism” has gotten easier. As I mentioned earlier, the advocacy space is more crowded and more and more people are posting things and tweeting things in support of issues they care about. So it’s harder to cut through the noise, and we’re going to have to get creative about taking actions that have impact.

Inspired by Jen’s activism? Join the first ever ONE Campus Summer Advocates Program.