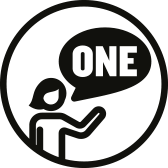 How To: Describe ONE

It’s crucial to know how to talk about ONE’s work and the opportunity in the fight against extreme poverty. Here are some basic guidelines on how to message ONE as an organization, our policy priorities and key stats.

The Power of Advocacy

Our voices have power.  Direct, personalized communication directed toward elected leaders is one of the most impactful ways to influence the decision-making process.  ONE calls these types of advocacy actions “catalytic actions,” and includes handwritten letters, phone cals, in-person meetings, tweets, or any other personalized communication that is directly addressed/delivered to a decision maker asking them to support one of ONE’s policy priorities to help end extreme poverty.

ONE is an international campaigning and advocacy organization made up of more than 9 million members taking action to end extreme poverty and preventable disease, particularly in Africa.

ONE DOES NOT FUNDRAISE. AS WE ALWAYS SAY,

“WE’RE NOT ASKING FOR YOUR MONEY;

WE’RE ASKING FOR YOUR VOICE.”